Birmingham, Ala. Citizens from across Alabama and neighboring states packed a room at the Birmingham Botanical Gardens on Thursday for the Alabama Water Management Symposium hosted by the Alabama Rivers Alliance and Southern Environmental Law Center.  The symposium’s purpose was to inform citizen stakeholders about the state’s effort to develop a water management plan by December 2013, a directive given to five state agencies by Governor Robert Bentley.  Specific focus was on protecting environmental flows in our rivers and waterways and the State’s plans to involve stakeholders in the process. 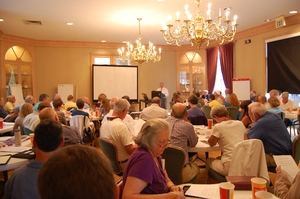 Citizens delivered a clear message to the state agencies that they want to see a roadmap and timeline of how the agencies plan to get to a water management policy by December 2013.  Another concern aired was the need for transparency and information sharing about the Alabama Water Agency Working Group’s meetings and activities.
“By default, because Alabama has no water policy, in Alabama water usage is currently addressed under riparian common law,” stated Lance LeFleur, Director of the Alabama Department of Environmental Management.  “When demand exceeds supply, such as is the case in drought or substantial population growth, allocation and other issues are problematic under a riparian system.”

Sam Fowler of the Auburn University Water Resources Institute reported that his group is on record as supporting a comprehensive approach to water management policy in Alabama and that it should be based on the Regulated Riparian Model Water Code, an approach outlined by the American Society of Civil Engineers.  This approach is supported by the Alabama Rivers Alliance and the Southern Environmental Law Center and was the basis for legislation introduced by these groups in the 2012 legislative session.

“The meeting exceeded our expectations in terms of content and attendance,” stated Cindy Lowry, Executive Director of the Alabama Rivers Alliance.  “It is encouraging to see so many passionate citizens who genuinely want to be more informed and engaged in this process.”

The Alabama Rivers Alliance and the Southern Environmental Law Center intend to follow the state process closely and help keep citizens informed.  Future informational meetings similar to the one in Birmingham are being planned for other parts of the state. The next Permanent Joint Legislative Committee on Water Policy & Management is on August 23rd at 9:30AM in Room 304.