The artist’s representation of “Sock’em Dog” on the Chattooga River depicts the beauty, power and excitement of paddling this and any challenging feature on the rivers and creeks we treasure. The last of the “Five Falls Rapids”, Sock’em Dog poses a test for all who pass. Many paddlers walk the Dog on their way down to “Shoulderbone”. This serigraph, donated by the artist, leaves only three remaining not in someone’s collection or gallery. 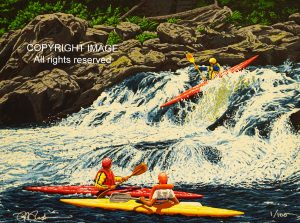 To bid on this engaging piece of art, email Kelly Marshall at [email protected]

Richard Allen (Rick) Rush was born in Mobile, Alabama. From an early age, it was obvious that “Rick” had a fondness and talent for drawing.  Rick often says, “Hemingway related to bullfighting, the sea, and war – I relate to sports.”

Rick studied art under the late Richard Brough at the University of Alabama, and graduated with a Bachelor of Arts degree in 1972. After graduating, he headed Southern Living Magazine’s Southern Living Gallery, where he coordinated promotions of art publications. At Southern Living Rick worked with, and befriended, George Rodrigue, Hubert Shruptrine and James Dickey; artists, who all encouraged him both personally and professionally.   In 1974, an ad appeared in the New Yorker magazine featuring four line drawings of tennis players by an unknown artist named Rick Rush. This was the beginning of a career that has spanned nearly forty years. The lithographed, signed and numbered Tennis: First Set was successful enough that Rick was inspired to pursue a career of painting not just as a second- job, but as a living. In 1975, Rick moved back to Tuscaloosa, Alabama and partnered with his brother, Don, in creating Rush Galleries.

Rick established his own studio in 1982 to create his hand done serigraphs using as a blueprint the studio of Norman Lassiter, who printed for numerous artists including Andy Warhol and Roy Lichtenstein. Rick’s hand-done serigraphs have been created in-house in Tuscaloosa, Alabama, ever since. Ricks work is sold in every state of the United States. Soon following, Rush Galleries oﬃcially incorporated into Jireh Publishing International.

For almost four decades, Rick has devoted his energies to painting the sporting life in America. Rick’s trademark sporting impressionism captures the spirit, as well as the technical accuracy, of sports events. Throughout his career, Rick has worked with and depicted numerous high-profile sports figures such as Joe Namath, Coach Paul Bear Bryant, Muhammad Ali, Albert Pujols, Nolan Ryan, Bo Jackson and countless others. Upon invitation, Rick has met with governors, senators and congressmen. He has twice been invited to the White House to meet with the President of the United States. Rick’s pieces are displayed in the Jimmy Carter Library and Museum in Georgia, and in the Ronald Reagan Presidential Foundation and Library in California. His works portray subjects of historic significance ranging from the Olympics, to Super Bowls and World Series, to Collegiate National Championships.   In 2011, the United States Sports Academy and the American Sports Art Museum and Archives named Rick Rush the Sport Artist of the Year.

Rick’s art captures the essence of sport. His paintings portray the American sports scene at its best, holding on to unforgettable moments that are suspended in time and space, memories on canvas, split seconds that spell the difference between a win or a loss. In sport, these moments come suddenly and leave just as quickly. In the art of Rick Rush, these moments live on forever.

What is a Serigraph Print?
The origin of Serigraph Printing can be traced to the budding textile industry of ancient Japan, where the process of Silk Screening was invented. While Serigraph Printing is a much more advanced form of Silk Screening, in principle, the two are still very much alike, as the techniques are generally the same. Traditionally, Serigraph Printing and Silk Screening creates a sharp-edged image using a stencil and a porous fabric. The Japanese used screens made of silk and hair tretched over wood frames to print very simplistic stencils of floral patterns onto their kimonos. Modern “screens” are made of polyester, stretched tightly over aluminum frames.

The Art of Serigraph Printing at the Rick Rush Studio
The Press at the Rick Rush Studio has been creating Serigraphs in-house since 1980. In modern printing, a thin coating of light-sensitive liquid is applied to the screen and stored in a darkroom to dry. Then, a stenciled image is drawn or painted onto a transparent film or sheet, and placed onto the screen and exposed to light. Light hardens the liquid coating on the screen – thus sealing the “pores” of the screen. The area of the screen covered by the stencil is left un-exposed, however, so that once washed, the screen now has a carbon copy of the stenciled image “burned” into it. Each of our “stencils” is painstakingly hand-painted onto transparent films, traced from a master copy of  the original oil painting. The “burned” screen is placed onto our press, and locked into place above our “Master” of the Original Painting. We very carefully register the screen to the master, and can then begin our printing of the one color.
At Rick Rush studios, many of our Serigraph Prints contain over 50 colors. For a painting with 58 colors, Rick must recreate the individual elements of his original painting 58 times onto the transparent films. Due to the nature of Serigraph Printing, where colors are applied to prints by hand, one at a time – each print is a unique piece of art, and is part of a very limited edition. One of the subtle beauties of Serigraphs is the relief of the print – because each color is hand-pressed one layer at a time, and then given a day to air dry, the layers of ink begin to take shape to form a subtle “dimension” and depth to the print.

Our Guarantee
Serigraph prints are labor intensive and costly to create. It takes approximately one month to create an edition of 200 to 300 prints of original serigraphs. Every print is given a thorough inspection by Rick Rush and staff both in the Rick Rush Studio, before, during and after every single color is pressed – and at the office of Jireh Publishing, before being hand signed and numbered and mailed to your home or office. Because of our thorough work, and our strict quality control – Jireh Publishing guarantees your satisfaction.
We take pride in our product and we know that the sophisticated collector will appreciate the quality of our work. Serigraph Prints are an investment. Due to the limited edition, unique attributes, and thanks to the quality of the craftsmanship, serigraphs by many contemporary artists have commanded as much as $100,000 in auction. Rick Rush Serigraphs continue to climb in value, as well, making each of our serigraphs a beautiful addition to an art collection, a fantastic investment, and even an heirloom for future generations.