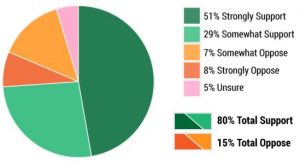 BIRMINGHAM, AL –The majority of Alabama voters strongly support the creation of a comprehensive state water plan and are concerned about threats to state waters, according to a recent survey.

Conducted by Public Opinion Strategies, the survey of over 400 registered voters throughout Alabama finds that four-in-five voters support the state legislature taking action to establish a statewide water action plan. According to the survey, 83% of voters view rivers and streams as state treasures that are critical to the Alabama economy.

Voters show overwhelming support for several potential outcomes of a comprehensive state water plan: 71% of voters support creating a permit for utilities, agriculture, manufacturers, and other major water users that is reviewed annually so that the Alabama Department of Environmental Management can better measure water use.

Overall, there is a consensus among Alabama voters that state and local government officials must have a plan to protect water in the state, especially during periods of drought and other times of crisis.

The survey shows that 80% of voters are in favor of conservation efforts and limitations on upstream water withdrawals to prevent rivers and streams from drying up. The Mobile Bay Basin has been listed as one of the nation’s most endangered waterways for 2017 due to a lack of upstream planning.

As the only state among its neighbors that does not have a statewide water management plan, the Southern Environmental Law Center (SELC) and the Alabama Rivers Alliance (ARA) have long advocated for developing a plan in order to address Alabama’s water needs while improving and safeguarding the health of its water resources.

SELC and ARA urge the Governor and the Permanent Joint Legislative Committee on Water Policy and Management in the Alabama legislature to take immediate action on the report and begin the necessary steps to create a water plan.

“With an election year right around the corner, it’s important that our elected officials know what resonates with Alabamians,” said Cindy Lowry, executive director of ARA. “It comes as no surprise that Alabama’s citizens want to ensure our water is protected so that our children and grandchildren can continue to enjoy our outdoor traditions and have plenty of clean, affordable drinking water. We also want to make sure our elected officials remember these results when making policy decisions that impact our rivers and streams in the upcoming legislative session.”

“As we saw with last year’s drought and after previous water scarcities, waiting for an emergency situation to take piecemeal action just puts us further behind our neighbors,” said SELC staff attorney Sarah Stokes. “The majority of Alabama citizens recognize the need to get a plan on the books —it’s time for our elected officials to take the reins and put strong, protective policies in place that address our current and future water needs, once and for all.”

Water providers, agriculture, environmental groups, local governments and the business community are working to identify threats to Alabama’s water supply and solutions to address them.

Currently, a report outlining recommendations for a state water plan is awaiting action from Governor Kay Ivey. ARA and SELC urge the Governor and the Permanent Joint Legislative Committee on Water Policy and Management in the Alabama legislature to take immediate action on the report and begin the necessary steps to create a comprehensive state water plan.

About Alabama Rivers Alliance:
Alabama Rivers Alliance is a statewide network of groups working to protect and restore all of Alabama’s water resources through building partnerships, empowering citizens, and advocating for sound water policy and its enforcement. For more information, please visit www.AlabamaRivers.org.

About Southern Environmental Law Center:
The Southern Environmental Law Center is celebrating its 30th anniversary this year. With nine offices across the region (Charlottesville, VA; Chapel Hill, NC; Atlanta, GA; Charleston, SC; Washington, DC; Birmingham, AL; Nashville, TN; Asheville, NC; and Richmond, VA), SELC is widely recognized as the Southeast’s foremost environmental organization and regional leader. SELC works on a full range of environmental issues to protect the South’s natural resources and the health and well-being of all the people in our region. www.SouthernEnvironment.org