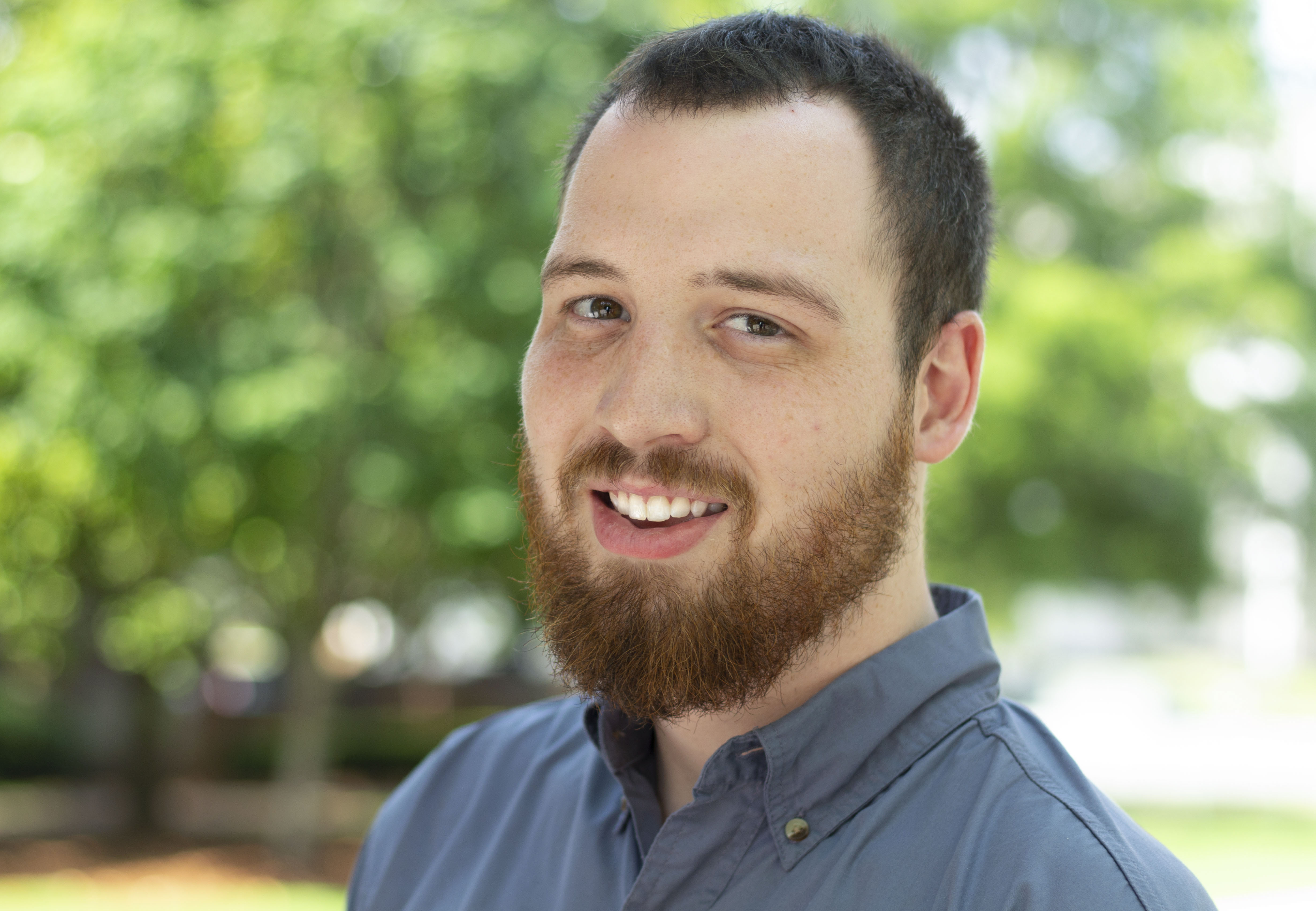 Last week marked the end of the Alabama State Legislature’s 2019 session. To those who followed the controversial developments in state politics over the last few months, it comes as no surprise that the session ended with as much relief as joy.

While issues like the gas tax or abortion dominated the headlines, it was a meaningful session for the environment and environmental policy. 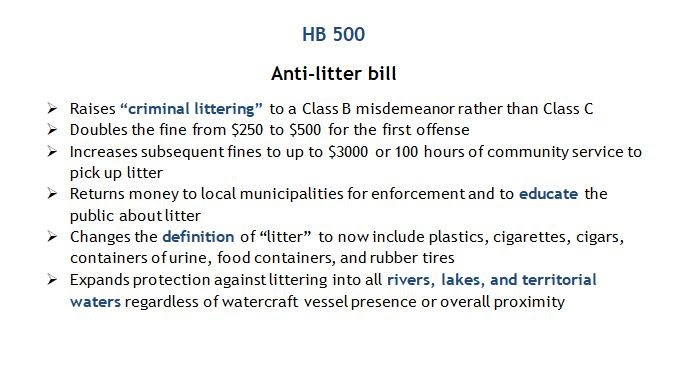 Perhaps the most notable success was the passage of HB500, an anti-litter bill redefining “criminal littering” as a crime in Alabama. Although the bill was introduced relatively late in the session, Representative Margie Wilcox (R-Mobile) was able to guide the bill through both houses—now awaiting the Governor’s signature. We are very grateful to Rep. Wilcox for championing this issue and for consulting with environmental groups, including Alabama Rivers Alliance, while drafting the language of the bill. Once signed into law, it will significantly increase the penalty for littering in public spaces, as well as impose community service requirements for offenders. The new fines are more commensurate with other states and more likely to deter littering. Previously, criminal littering had a narrow definition for littering into waterways; someone was guilty of the crime when littering into a waterway only when doing so from a water vessel more than 25 feet long. Now, littering applies anytime someone dumps or drops litter into a waterway.

I am also grateful for the people of Alabama for contacting your state officials to support this bill. Our good partners atConservation Alabama prioritized this bill and published several action alerts. Despite being crunched for time so near the end of the session, HB500 was one of the last bills to pass in the general session! Read the full bill here.

Anti-litter laws were some of the first environmental laws in Alabama—passed during the early days of a history-changing environmental movement. Just as the case was more than fifty years ago, supporters understand HB500 will help beautify Alabama. It will protect ecosystems and wildlife. And hopefully it will push the conversation forward for other environmental policy issues in need of attention.

Agency funding has long been a top priority for the Alabama Rivers Alliance.  Alabama’s resource agencies are primarily responsible for the protection of our environment, wildlife and public health. Despite having such vital missions, Alabama is routinely one of the most underfunded states in the nation when it comes to protecting our environment.

As is often the case, agency funding was a mixed bag this year. The Department of Environmental Management received some important increases to work on water quality issues in the General Fund—in addition to the recent announcement that the EPA will contribute more than $41 million dollars to Alabama via the State Revolving Fund Program. That money will go to wastewater treatment and water infrastructure. It is important to note that the money, as a part of the Revolving Fund, is a low-interest loan that would require repayment and interest, making many low-income communities most in need of these funds unlikely to secure the funds.

In more disappointing news, the recently passed budget did not fund the requests of multiple agencies to complete an Alabama Water Plan. State water-focused agencies coordinated to request $2,056,000 in Fiscal Year 2020 to properly create a water plan. Here is Alabama Rivers Alliance’s letter supporting that funding.

Despite missing out on the funding, many of the agencies are pressing on to adopt a water plan. We urge the state to fund these agencies in full in future years and to allow them to create a strong plan that protects all of Alabama’s environmental resources. 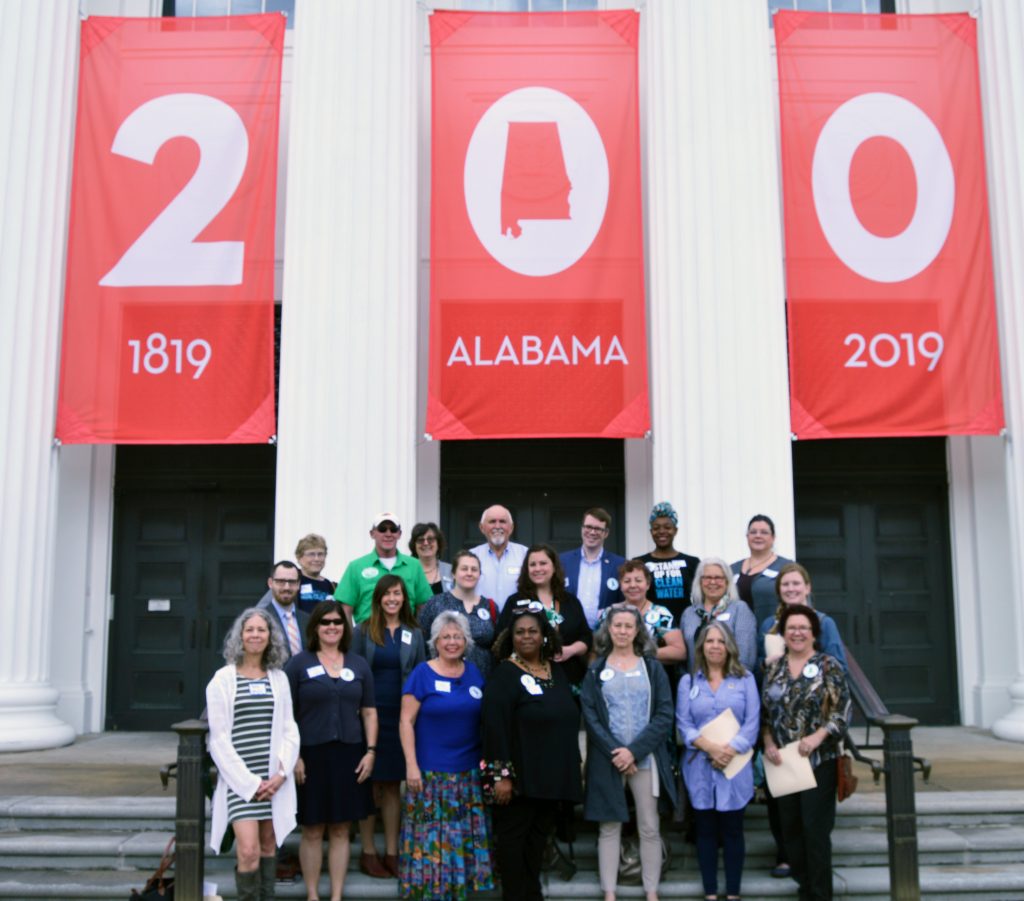 As the summer heats up, the state becomes more susceptible to water shortage and drought. For nearly a decade now, Alabama Rivers Alliance has called for a strong statewide water plan to keep rivers and streams healthy and flowing.This year, HB476, the Water Conservation and Security Act, sought to improve the state’s underlying water management policies. Read about the bill here. We are grateful to Representative Neil Rafferty (D-Birmingham) for introducing this bill and working tirelessly to reach across the aisle and to educate his fellow members, as well as engaging representatives from relevant agencies and industries.  Unfortunately the bill was unable to advance out of the State Government Committee, despite receiving support from around the state. Still, we made invaluable strides this session. With so many new legislators in the first year of the quadrennium, supporters of the bill were able to talk to decision makers and educate them on this very important yet difficult to understand issue. With more than 1,200 emails sent and dozens of face-to-face meetings, we made significant progress as a movement towards greater support and awareness of comprehensive water planning.

A few other important things happened this year. The state created a gas tax, including a $200 fee for electric vehicle owners, to fund infrastructure projects. Projects will pass through an “objective criteria” analysis to include cost, harm, and ecological impact among other variables. This process should ensure more rigorous review of projects that could have large effects on rivers, streams or ecosystems. A separate bill was filed to improve water treatment standards for public utilities; despite failing to pass, the introduction successfully convinced the state to adopt better technical regulations during water treatment. Finally, the infamous plastic bag ban ban failed to pass after significant backlash from members of the public and local municipalities. That defeat is an excellent example of the power of grassroots environmental movement; it showed the value of working together for a common goal.

Thankfully, my attention will now shift away from the State Legislature—at least for a couple of months. Just because the session is over does not mean policy stops. ARA will continue to work on regulatory and legal issues. We will continue to work with agencies, the federal government, local communities, and most importantly members of the public to #DefendRivers.