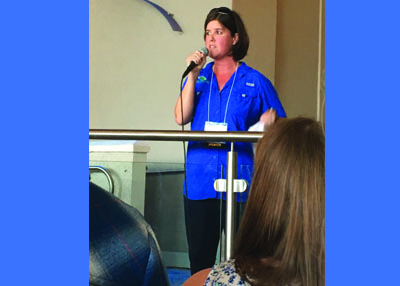 This speech was originally presented by ARA Executive Director Cindy Lowry at the Opening Reception of River Rally 2016 in Mobile, Alabama. We sure wish we had video!

Welcome to Alabama the Beautiful!  My name is Cindy Lowry and in case you can’t tell from my accent, I was born and raised in Alabama.  I grew up in a small town in the north central part of the state called Oneonta, a name of Native American origin meaning “mountain” or “where the rocks hang down”.  I am currently the Executive Director of the Alabama Rivers Alliance and I truly believe I came to this position naturally.  My grandfather had some land near Oneonta that was passed down from his father.  This land is known to our family as the Bend of the River.  It is surrounded on 3 sides by the Locust Fork River.  The Locust Fork is one of three major Forks that combine to form the Black Warrior River, whose waters flow down through the heart of the state eventually ending up right here in Mobile Bay.

As a child, I didn’t know anything about that.  I didn’t even know that the Locust Fork River boasts some of the Southeast’s most beautiful natural whitewater or that it is geologically considered one of the oldest rivers in the country.  All I knew was that I loved to dip my feet in that water on hot summer days.  Fishing, swimming and camping along that River became some of my fondest memories of childhood.  In addition to providing me with a great natural playground, my grandfather was once a one-term Alabama State Senator.  He stood up for something he believed in, even though it meant not getting re-elected.  That is something you don’t see these days.  It took almost ten years after college for me to find my vocational calling with the Alabama Rivers Alliance, but it seems only natural, with that legacy, that I would end up as a river advocate.  And now here I am more than 15 years into it and I get to stand up and tell you beautiful people why Alabama is special.

You will hear a lot this weekend about Alabama’s amazing biodiversity from people like Ben Raines and Scott Duncan who can speak much more in depth about it than I, but for starters, I’ll tell you that Alabama is home to over 132,000 miles of rivers and streams.  10% of the freshwater resources of the entire United States flows through Alabama and we rank #1 in the nation for diversity of freshwater fish, mussels, crayfish, turtles, and snails. Yes, you heard that correctly.  Alabama’s rivers are as diverse as the species they support, both geologically and hydrologically.  Prepare to be more amazed by the America’s Amazon movie trailer tonight and the lunch keynote speaker tomorrow.

The other very special thing about Alabama that I want to share with you tonight is our strong and thriving river movement.  If you take the time to look deeper than the headlines, you will see that Alabamians are not all about political corruption and holding on to the status quo.  We are even about more than football if you can imagine such a thing.  You need only go back as far as the 1960’s and the Civil Rights Movement to know that the real people of Alabama will stand up when wrongs are being done.  It was also in the 1960’s that our first environmental organization was formed in Alabama.  Those early environmentalist fought for the passage of the Eastern Wilderness Act and it was right here in Alabama that the first wilderness area east of the Mississippi was designated.  Our river movement draws courage and inspiration from this rich history.

As a movement, we are admittedly, not as diverse as our aquatic species, but we are constantly embracing the challenge to align with all progressive partners in the state to achieve healthy rivers and healthy communities.  Today our river movement includes more than 30 active water focused advocacy organizations (8 of which we are happy to say are official Waterkeeper Alliance members).  We also have 20 multi-issue environmental advocacy partners, 9 environmental justice and social justice partners, and 7 recreational focused partners.  In addition to our advocacy partners, Alabama has more than 35 conservation and environmental education organizations working in various ways to preserve our amazing rivers and water resources.  Alabama has an old motto “We Dare to Defend our Rights”.  In the river movement, we have changed that to “We Dare to Defend our Rivers”.

The Alabama Rivers Alliance would not be here today with such a strong circle of partners by our side if it were not for the resources and assistance we have received over the years from River Network.

River Rally is an essential part of our ability to stay networked together and to be a part of the broader river protection movement.  That is why we are thrilled beyond words to have you all in our beautiful state this year.  We hope that you will enjoy being here and that you will leave with a better understanding of who we are as a people and as part of the overall biodiversity that is so important to all life on Earth.

And now to I will turn it over to one of our leading Waterkeeper partners, Casi Callaway, to tell you about our Mobile Bay area.