Falling in Love with Alabama’s Rivers – by Charles Miller

Guest post by Charles Miller is a part of American Rivers’s America’s Most Endangered Rivers® series spotlighting the Mobile Bay Basin. Click here to read on their site. 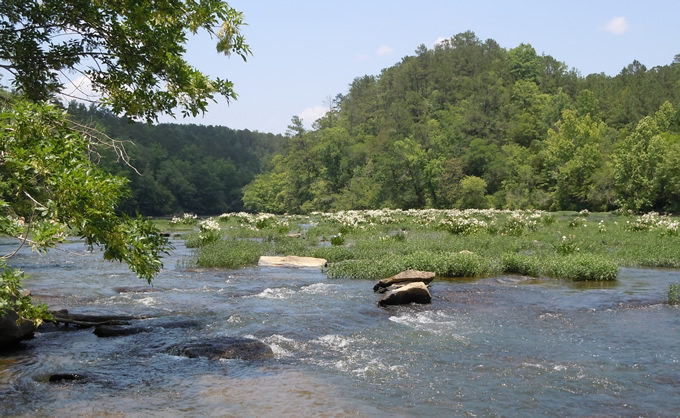 In Bibb County, Alabama, down dirt roads and past stands of longleaf pine, runs a profoundly special stretch of the Cahaba River. It is a place that seems a world apart from the hustle and bustle of Birmingham, an hour’s drive to the north. This stretch of the river and the surrounding hills have a paradoxical combination that can be found in many natural places: perfect stillness and incredible motion. The shoals here continue the millions-of-years-old process of cutting water gaps through parallel ridges, while the summer’s hot air hangs motionless above.

The Cahaba is, in many ways, the last real river in the Mobile Bay Watershed; the only one that escaped the transformation into a series of reservoirs that the Coosa, Tallapoosa, Alabama, and Black Warrior rivers were subjected to in the early 20th Century. The Cahaba is a remnant of the astounding biodiversity once found throughout each and every river and stream of the Mobile Basin. This variety, now largely lost to the ages, still exists in other pockets as well, but as time (and human encroachment) march on, is becoming increasingly rare. Now only the hardiest endemic species cling to the niches they’ve adapted to over hundreds of thousands of years.

My personal feelings about the Cahaba stem from more than just its physical characteristics. It is to me, what countless of streams in countless of places across the country have been to Americans for years: it is my river. It is where I learned to swim and paddle. It is where I made the connection between the abstract science I was learning at the University of Alabama and the reality of the immense, dynamic processes through which rivers shape the land. When I have dreams about rivers, it is the Cahaba that I see, with lily-cloaked shoals the size of football fields under cerulean skies.

Unfortunately, without improved water management, these dreams may someday be all I, and other Alabamians, have left of the Cahaba as it exists today. Alabama is the only state in the region without a comprehensive water management plan, and the effects of that were demonstrated during a record drought last year. Reservoirs throughout the state reached record lows, and in many areas streams and creeks ran completely dry. Even rivers that did not dry up faced severe impacts from lower flow rates, leading to a degradation of water quality.

As droughts increase in frequency and severity, and demand for water continues to grow, Alabama must take charge of our water resources and our irreplaceable natural heritage. Without rules to regulate water withdrawals and protect instream flow, we run the risk of permanently damaging our state’s economy and its capacity to provide clean, affordable drinking water to its citizens.

Steps are being taken to move the state towards this necessary goal. In 2012, the Alabama Water Agencies Working Group (AWAWG) was convened to develop recommendations for a statewide water plan, and in 2017, they reported their findings to the governor. Unfortunately, Governor Kay Ivey has yet to release this report to the public.

In the 2017 Legislative Session, Rep. Patricia Todd introduced the Alabama Water Conservation and Security Act, which would have given the state government the authority to implement a comprehensive water management plan. Local, state, and national groups, including American Rivers and Alabama Rivers Alliance, continue to advocate for the release of the AWAWG report, as well as the adoption of a comprehensive water management plan. The hints of progress over the past few years are heartening, but in order to ensure the future of the river system E.O. Wilson called “America’s Amazon,” as well as the communities that it flows through, Alabama must step up to the plate and develop a plan to responsibly steward our water resources.

Act now to tell Governor Kay Ivey to pass strong protections for the flow of water necessary to sustain and protect the amazing biodiversity of the Mobile Bay Basin and the people who rely on this system. 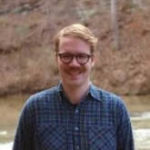 Charles Miller is a nearly lifelong resident of the Alabama-Tallapoosa-Coosa River watershed. He recently graduated from The University of Alabama with a B.A. in Political Science and a minor in Geography. Growing up on Green Mountain in northern Alabama, he gained an appreciation for the importance of wildlands and open space, especially in urban and suburban areas. Charles enjoys traveling, hiking and photography. Charles is an AmeriCorps Alumni and serves on the Junior Board for the Alabama Rivers Alliance.