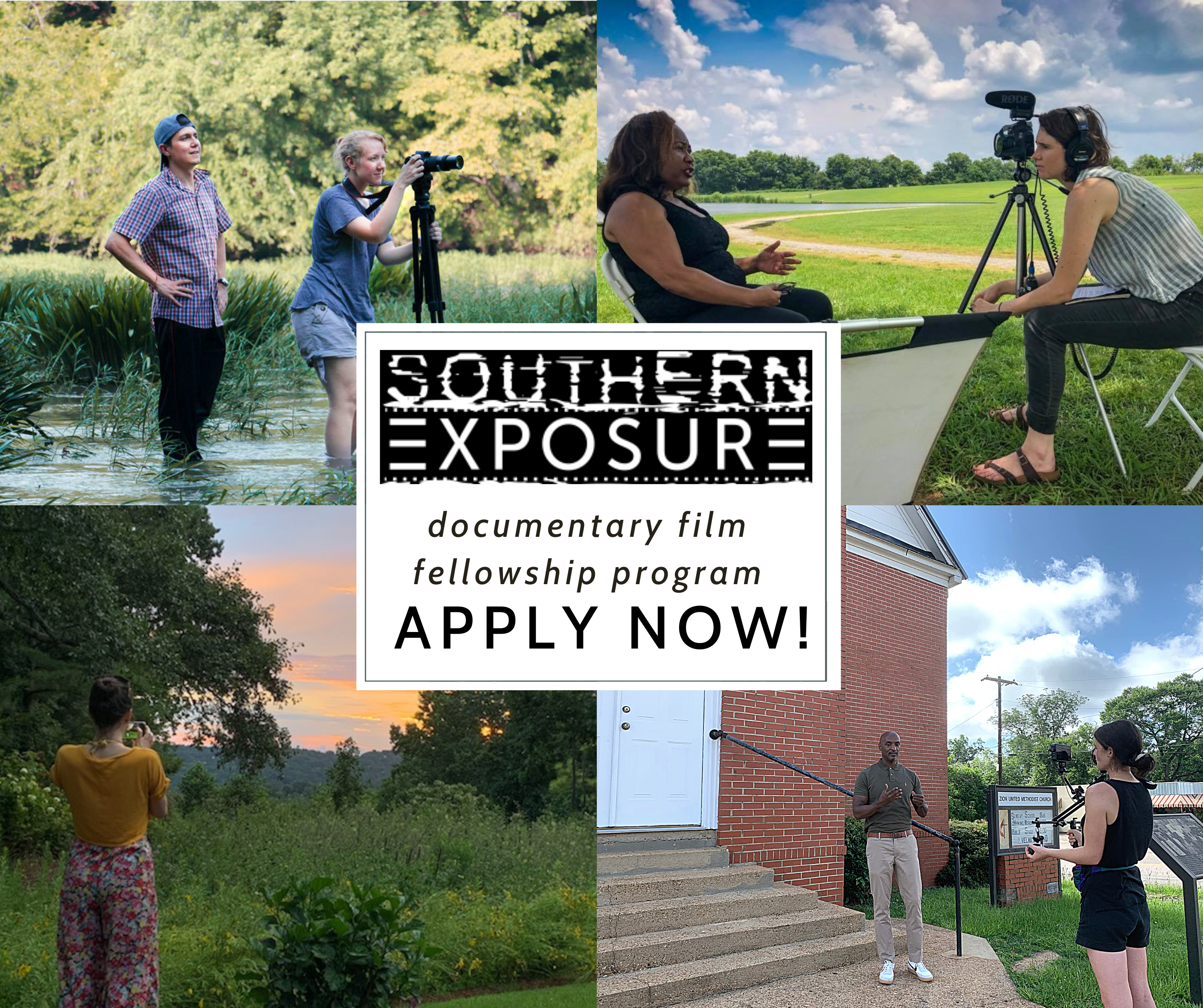 Documenting the Struggle and Successes

for Environmental Protection in Alabama

A Multimedia Summer Fellowship sponsored by the Alabama Rivers Alliance

Now in its 10th year, the Southern Exposure Film Fellowship program provides a challenging yet incredibly rewarding learning experience to exceptional film students and emerging filmmakers from across the country seeking to explore and develop their talent as environmental advocates through nonfiction storytelling. This innovative summer fellowship equips students with the skills, equipment, content knowledge and contacts to create authentic, engaging, inspiring films intended to raise public awareness about important issues facing Alabama’s environment — from the mountains to the coast. The selected fellows will use their skills and talents to serve local communities and the environmental organizations that support them. This fellowship includes a weekly stipend and housing is provided.

The selected film fellows will spend the summer working in partnership with Alabama Rivers Alliance’s partner groups and other state environmental organizations, who will provide guidance on film topics and crucial community contacts to help the fellows create the short documentaries that will be most useful for raising awareness and advocating for the protection of Alabama’s special places.

The finished films become a part of the Southern Exposure Series and are screened at events all across Alabama. They are also submitted to film festivals across the globe.  To watch the films from previous fellowship years, visit: www.SouthernExposureFilms.org

We strongly encourage applications from Black and Indigenous people and other people of color, people from all socio-economic backgrounds, women, LGBTQ+ people, and other people of historically excluded identities. The requirements for the fellowship are general guidelines. If you have a passion for environmental story-telling but lack some of the stated requirements, please consider applying.

Southern Exposure seeks the best and brightest up-and-coming documentary filmmakers committed to protecting our natural resources, improving human health, and achieving environmental justice through film, journalism and collective action.  Selected fellows come to Alabama from across the country and represent a broad base of backgrounds, including broadcasting, law, psychology, literature, science, anthropology, education and film production.  This makes for a thriving interdisciplinary environment in which filmmakers share skills and build long-lasting relationships.

Although participants are not required to have backgrounds that would necessarily lead to careers in filmmaking, applicants are required to have completed at least one short film in order to be considered.  Applicants must have a demonstrated ability to work collaboratively, as this fellowship is a highly interactive and interpersonal experience. A weekly stipend and dormitory style or other suitable housing will be provided.

The following materials must be received via email by March 31, 2022 in order for you to be considered for the program.

Films should be uploaded to YouTube or Vimeo as indicated above.  If you choose to submit a letter of recommendation, the letter should be emailed from the account of the person who writes the letter directly to [email protected].

Applicants will be notified of their status by mid-April 2022. *Some dates are subject to change, but will be announced well in advance. Questions? Email us at [email protected]

Michele Forman is an award-winning documentary filmmaker and co-founder / director of Media Studies at the University of Alabama at Birmingham.

Forman gained her experience as an executive in feature films.  As Director of Development at Spike Lee’s 40 Acres and a Mule Filmworks, she was responsible for the acquisition and development of new projects.  In addition, Forman served as associate producer on Mr. Lee’s Academy Award-nominated film 4 Little Girls, a feature-length documentary for HBO about the bombing of the Sixteenth Baptist Church in Birmingham, Alabama, in 1963.

Since then, Forman has been directing and producing documentary projects for film and television, earning an Emmy nomination for Coat of Many Colors (2001).  Her feature-length documentary Climb for the Cause: A Breast Cancer Story (2007) documents five women who became activists for women’s health after surviving breast cancer.  The film sent Forman up Mt. Kilimanjaro, one of the world’s tallest peaks. She also produced the multiple award-winning documentary Alabama Bound (2017), which explores the legal roller-coaster ride of LGBTQ family rights in the South over the last decade. Learn more about her by clicking here.

As the Impact Producer for Southern Exposure films, Kelly ensures the films are seen far and wide. She plans dozens of screenings of the films with community groups across the state and at colleges and universities. She works throughout the year to submit the films to appropriate film festivals around the globe, to ensure the stories and messages reach audiences of all demographics.

Alabama Rivers Alliance is a statewide network of groups working to protect and restore all of Alabama’s water resources through building partnerships, empowering citizens, and advocating for sound water policy and its enforcement. To learn more, please click here.