Governor Bentley: Defend our Rivers During this Drought

Governor Bentley: Defend our Rivers During this Drought 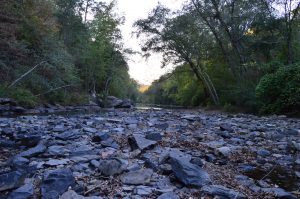 Alabama is once again in the middle of a drought crisis and the lack of a state oversight over the management of our water and the protection of our rivers is glaringly obvious.

As of October 4th, all 67 of our counties are experiencing dry conditions with almost a quarter of the state under “severe” to “exceptional” drought conditions. Across the state, Alabama’s rivers — such as the Cahaba River, the Locust Fork of the Black Warrior River, the Paint Rock River, the Little River, and the Alabama River — rivers that make Alabama one of the most biodiverse places on earth,  are approaching record low flows and in many rivers, including the Cahaba River in Mountain Brook and Vestavia Hills, the majority of the flow that is present is the treated wastewater discharged from upstream treatment plants.  While the “shock value” of today’s drought pales in comparison to the catastrophic drought of 2007, the impacts on our state’s treasured rivers are critical. There has been no response from the state to address the drying out of our rivers and now drinking water supplies are becoming affected.  Because we have no overarching state plan our local water utilities have been woefully slow to act. The repeated mantra of many water utilities across Alabama is that they are in the business to sell water — not promote conservation.  The unsurprising result is that they routinely take action only after a catastrophe is fully underway. Despite signs as early as May that this was coming, local water utilities are only now suggesting that customers reduce water use.

Alabama is home to many of the few remaining refuges of natural biodiversity in America.  Now these treasured places are under extreme stress due to the ongoing drought and the mismanagement of our state’s water resources.  While droughts are part of the natural water cycle, our water consumption along with the alteration of the watersheds greatly exacerbates a drought’s stress on the river and the organisms that live in it. Sadly, in this round of drought, it is the rivers that are being hit first and hardest while the people of Alabama have thus far been largely unaffected.  This will change as water supplies begin to drop.

While we are seeing the flow drop in many rivers across Alabama, most pressing is the reduction in flows in the Cahaba River in Birmingham.  This watershed has been in a severe drought for more than two months and is now listed as being in an “extreme” drought. Those words seem to have failed to convey the seriousness of the problem.  In an era of X-Games and Xtreme coolers, tires, shoes, pizza, etc., we have become jaded to the real impacts an “extreme” drought can have on our water resources and the river systems that supply the water.  Only now, when Lake Purdy, our largest city’s primary drinking water reservoir, is down to 37% capacity do we see the water utility implementing any form of water use restrictions.  This is welcome but in many ways it amounts to putting a Band-Aid on a wound that should have had a tourniquet.

This situation reveals that Alabama’s drought plan is a sham and that an actual water plan is non-existent.  Since the droughts in the 80s stakeholders have been calling for better management of our state’s water resources warning that it was only a matter of time before we would face another catastrophic drought. In 1990, the Alabama Water Resources Study Commission issued a report entitled Water for a Quality of Life in which it called on the state to adopt a comprehensive water management plan in order to avoid similar water crises that plagued the state in the late 1980s.  In 2012, after the 2007 drought,  the Environmental Law Institute assessed Alabama’s laws and policies related to water efficiency and conservation in The Water Efficiency and Conservation State Scorecard: An Assessment of Laws and Policies and found the state woefully lacking in water consumption management and drought response planning. Most recently, the National River Network released the report Protecting and Restoring Flows in Our Southeastern Rivers: A Synthesis of State Policies for Water Security and Sustainability finding Alabama consistently behind our neighbors when it comes to adopting best management practices to ensure that water resources are used sustainably.

Again and again Alabama has put off acting or capitulated to the political pressures asserted by the powerful entities that have preposterous control over our State’s waters. Now this failure to act is wreaking havoc on Alabama’s most treasured waters. In 2014, when the water was high, the state legislature touted the passing of the “Alabama Drought Planning and Response Act”. Put in practice this act is revealed to be little more than a communications plan devoid of teeth.  What was (is) needed is a true water management plan: a plan that accounts for how much water is being used and where; a plan which establishes real protections for stream flows.

The state must not stand on the bank and watch our rivers dry to death.  Because we have failed to manage our water resources and plan for drought at the state level, Alabama’s leaders must now take drastic action to avert irreparable harm to our State’s most important water resources.

In order to preserve a basic subsistence flow in our rivers Governor Bentley must exercise his authority and restrict all outdoor watering from water sources that impact stream flows in areas designated as “abnormally dry” or higher on the United States Drought Monitor.  Along with this, water utilities must engage their individual drought response plans to reduce water consumption While severe, this is the only option available to the state under the current drought plan that will address the immediate crisis facing our rivers.  . We understand that this will have far reaching economic impacts and we encourage the State to consider all relief mechanisms available to ease the burden on affected water users.  Unfortunately this is the kind of bad choices we are left with when we fail to plan before crises strike.

In conjunction with these immediate actions, the State must promptly adopt a true water management plan that considers the needs of all water users as well as the flows needed to sustain Alabama’s 132,000 miles of rivers and streams.  The current system of water management does not protect rivers nor is it fair to those who rely on irrigation.  Every time we have a drought the rivers’ flow is sacrificed well before any action is taken and irrigating industries are called on to bear immediate and disproportionate burdens to reduce water consumption.  Water conservation must be the cornerstone of all water use and crisis prevention must begin before our rivers run dry.  Fortunately, the State has been moving towards a statewide water management plan with the work of the Alabama Water Agencies Working Group.  The AWAWG is charged with submitting a formal recommendation to the Governor by the end of this year.  We cannot afford to pull our punch again: their recommendation must recognize the lessons learned in this and previous droughts and present the Governor with a true plan for sustaining Alabama’s water resources now and into the future.  We can no longer accept the failure of the status quo.

Please contact the Governor and your local water utility and let them know that you want them to protect our rivers and our water during this drought crisis.

CLICK HERE TO TELL THE GOVERNOR TO DEFEND OUR RIVERS.